Well this blog is about me or to be more precise the feminine side of me who goes by the name of Trixy Deans. Why Trixy Deans you might ask, well at the time that I was starting my online presence I obviously needed a feminine name, Trixy Deans just popped into my head (more about things popping into my head later) it reminded me of Dixie deans who was an old Everton footballer which is strange in itself as I am a Manchester United fan.   Well as my online presence has grown over the years it has become more difficult to change the name so I am stuck with it.

So anyway, my name is Trixy Deans and I am a crossdresser.

It all began at the tender age of 9  the first item of feminine attire that I wore was my sisters black swimming costume she was 11 at the time. As the years passed I graduated to my sister’s and mother’s underwear I only dressed in panties, slips and pantyhose, I suffered from the usual guilty feelings after each session, and no matter how many times I told myself never again, I always would return to my sisters or mother underwear draw with their treasure trove of silky delights.

On leaving school I moved to London to work for the world’s favourite Airline as an engineering apprentice,  so my dressing came to an abrupt halt as I was cut off from my supply of underwear.

For the next 17 years my dressing sessions were limited to the wearing my girlfriends and eventually my wife’s underwear in secret.

My first wife passed away at an early age from breast cancer and I was a young father with two young children. I met and fell in love with a girl who was 10 years my junior, and we eventual married. At the start of our relationship I confessed to her my desire to dress as a woman. She was shocked at first but has been supportive ever since. The only rules that she has put in place are  not in front of the children (we had three more) and never in public, that was 30 years ago this year.

Well my dressing progressed sporadically over the years but really flourished when I spend a couple of years living and working apart from my family. I lived alone in a small flat so was able to dress at will. It was during this period that I stared to accumulate my own cloths and first experimented with make-up and wigs. It was also at this time that I realised that I wanted to look as feminine as possible and that looking like a bloke in a dress was no longer enough.

Well the family and I were eventually reunited so my dressing opportunities were limited once again. This situation continued for a few years until once again I was living and working apart from my family. During the next 3 years my dressing really took off and I acquired a large wardrobe and honed my makeup skills.

Once again, I was back living with my family and have never worked away from them since. With the kids at home dressing opportunities were again limited. This situation continued for the next 8 years. Things changed for the better when I was able to work a couple of days a week from home which meant that I was finally alone in an empty house so my dressing opportunities flourished once again.  I still had to be aware of when the kids, still living at home, would be coming home from work or college. There was an element of surprise in their return times which led to a few close calls (more of that in later posts.)

So, since 2013 I am able to dress almost at will and with the advent of online shopping I have built up a large and varied wardrobe. I still consider myself to be a football loving golf playing man who likes to become a girly girl every now and then. I remember having a conversation with my wife in the car around the time of the Caitlin Jenner story and I told here don’t worry dear I don’t want to do a Caitlin.

Well that enough for now 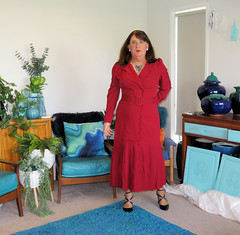 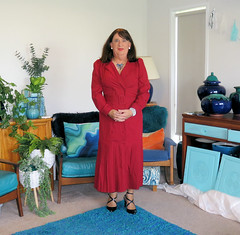 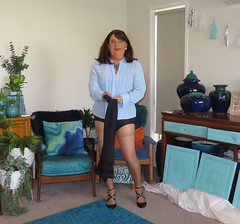 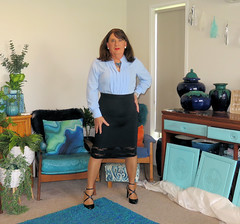