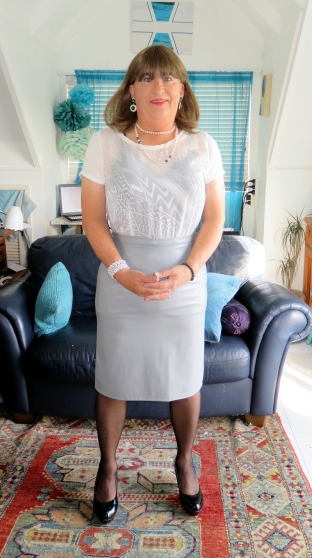 This is an amusing story that I first put on my Flickr profile in 2013 when dressing opportunities were limited.

Saturday has become Trixy’s day it’s the only day when all the members of my family still living at home will be out. My wife and eldest son will be at work. Middle son spends the afternoon and evening in town playing magic cards and my youngest son is either working or playing rugby.

So today is Saturday and I thought that Trixy might come out to play. Unfortunately, the rugby season is over and no work today for number three son so he will be hanging around the house all day.

On returning home after dropping number one son at work I was surprised to find an empty house. A quick phone call established that number three son was out shopping and given his usual habits Trixy would have a couple of hours to play.

Still wary of the exact location of number three son I dressed first and left my makeup until the end which is the opposite my usually practice. This was so to ensure that should number three son return unexpectedly I would only have to remove cloths not make up. When I was fully dressed I decided that it was safe to do my makeup and Trixy appeared in all her glory.

I set up the camera in the usual studio area and had only taken 2 pictures when to my horror I heard the duff, duff of a car sound system coming down the driveway, number three son was home. To say that I panicked was an understatement, I rushed into the relative safety of our bedroom.  I say relative safety because our bedroom door does not have a lock. My wife and I have never locked our bedroom door so it is a bit of a freeway and our kids come and go as they please. I sought further refuge in our walk-in wardrobe which only has a thick curtain not a door (it has doors now) but this was better than standing in the middle of our bedroom should my son walk in.

I stood there in the dark pondering what to do next, I keep an emergency kit in the bedroom consisting of a flannel, make up remover etc just for occasions such as this, all I needed was for my son not to come into the bedroom looking for me.  As I stood there another thought entered my head, why not just go out and introduce my son to Trixy. My wife and I have long suspected that number three son has experimented with woman’s cloths or at least underwear. One of my nylon full slips went missing from my wife’s wardrobe and we suspected it was number three son. My wife and I had a quiet giggle at the thought that out son believing he was pilfering his mother’s underwear was in fact stealing it from his father.

All these thoughts were running through my head as I stood in the dark, I decided against the big Trixy entrance mainly because the pact that my wife and I have regarding Trixy is based upon the kids not knowing about Trixy.  I had also agreed that I would not talk to number three son about Trixy unless he raised the subject of cross dressing.

Decision made I frantically started removing my clothes (have you tried to unlace a corset in the dark).  I was down to my undies and stockings when I heard the chinking of beer bottles, the sound of front door opening and closing and the roar of my son’s car driving away.

Phew be still my beating heart, the whole situation had lasted no more than five minutes but my poor heart was pounding. There was a very large upside I now knew where number three son would be for the rest of the afternoon and Trixy could look forward to some stress-free quality time. 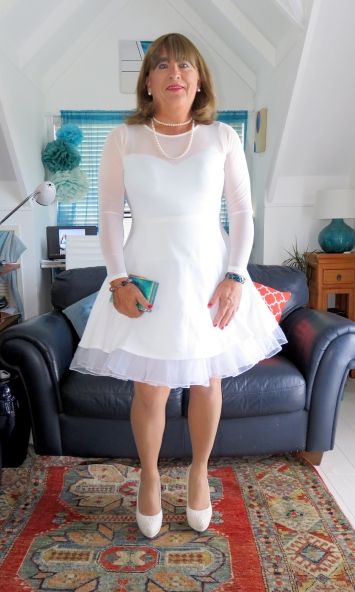 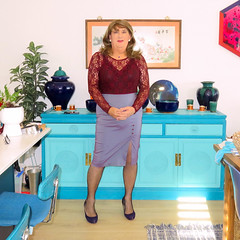 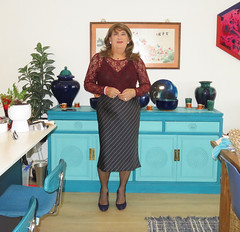 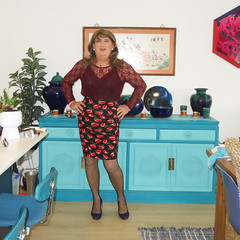 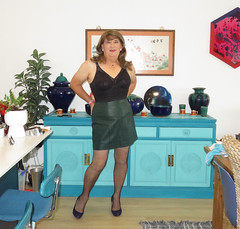